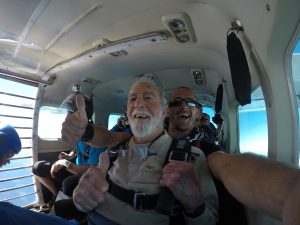 While there’s no question that jumping out of a plane at any age is an achievement, taking your first tandem dive at 90 is something pretty special.  For Banksia Village resident Denis Belford, however, it seemed like a great way to celebrate becoming a nonagenarian.

A few months ago, Denis was at nearby Moruya Airport with family to farewell a visitor.  They spent several minutes watching people taking solo and tandem sky dives above the airport.  Denis observed to his daughter, “That seems like rather a peaceful thing to do”.

And so the family challenge was on to arrange a really special celebration for Denis’ upcoming 90th birthday: his first ever tandem sky jump!

Having sky dived before, Denis’ daughter Joanna knew the ropes and was confident her Dad would be fine to do a tandem dive.  Her sister Michele contacted SkyDiveOz to book Denis in for his big day.

After rain overnight, Friday 2 February dawned cloudless, still and warm – perfect conditions for sky diving.  Denis and his family arrived at the airport again, this time for a very different reason:  to see Denis kitted out in safety gear, briefed about the dive from his instructor Richie, and then jump out of a plane. 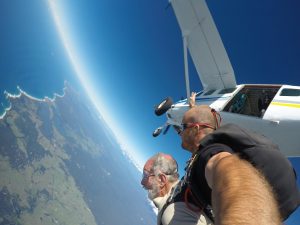 “I wasn’t actually nervous”, said Denis.  “Once you’re up in the plane, you’re harnessed to your instructor and he looks after everything”.

The plane reached an altitude of some 14,000 feet, and the family below held their breath as their now 90-year-old father emerged from the plane.  Asked if he’d had second thoughts at this point, Denis said: “You don’t have a choice really.  Once you’re in the doorway with your legs hanging out, you pretty much get plucked out”. 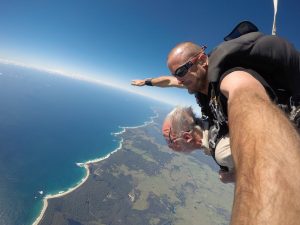 And the dive itself?

“It was amazing, really exhilarating.  The free fall felt like it lasted for minutes, and you spin round and round, but it was probably only around 60 seconds.  Then Richie deployed the parachute and that’s when it got really peaceful.  We just floated down. I could see up and down the coast from above Moruya, and Richie was taking pictures all the time.  Exhilarating.” 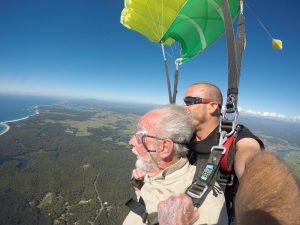 After an uneventful landing, Denis rejoined his family to celebrate two amazing achievements on the one day – turning 90 and completing his first tandem skydive.

Would he do it again?  “Probably not.  But hang-gliding, now there’s something…….” 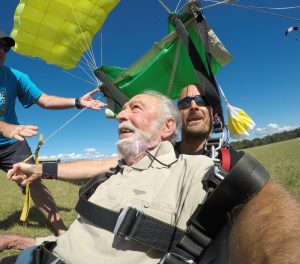